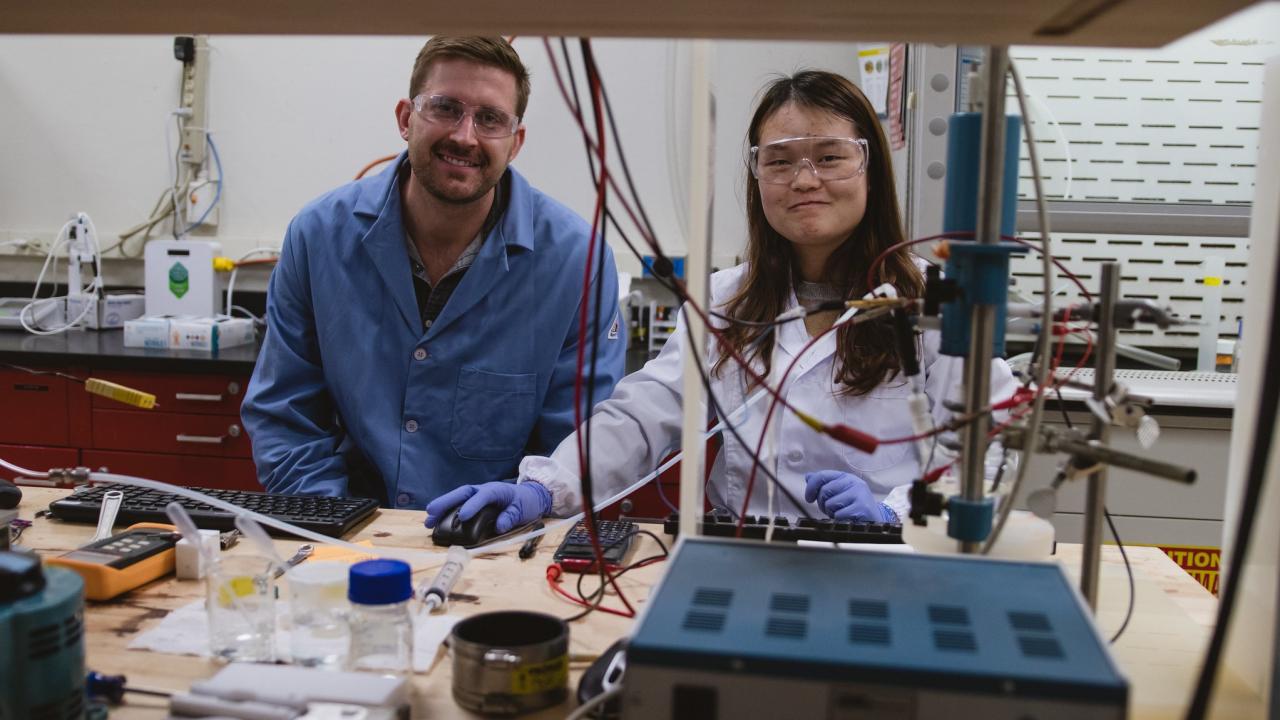 As a third-year faculty member in the Department of Chemical Engineering, he is exploring how electricity from renewable sources like the sun and wind can be used to convert alternative chemical feedstocks, such as natural gas, into important chemical products.

Most commodity chemical products today are manufactured from petroleum-based resources at centralized facilities, often at high temperatures and pressures. As a result, certain key processes are not as environmentally friendly as they could be. The efficient use of natural gas, which in recent years has been proven to exist in the United States in large quantities, presents a unique opportunity to design chemical synthesis plants that are smaller, geographically distributed and powered by renewable energy.

“I work on new processes to drive chemical transformations that take advantage of this abundant resource,” said Kronawitter.

Much of his research at UC Davis involves designing and testing new catalysts that drive chemical reactions involved in converting natural gas constituents to value-added products, such as acetic acid, ethylene and methanol. Because the molecules that make up natural gas are very chemically stable, novel catalysts with new properties must be discovered to develop technologies that can compete with conventional processing routes.

To study the reactions and how they work, Kronawitter and his graduate students build novel chemical reactors in his lab. He says he uses them to not only “prove that we can make valuable chemicals from natural gas, but do so at low temperatures and pressures using only electricity, water, and air as inputs.” The reactors have also been designed to allow him to probe exactly what is happening in the reactions by studying the intermediate molecular species produced along the way, which often exist only transiently.

“We are not only pushing the state-of-the-art of technologies to enable the electrification of the chemical industry, we’re also figuring out how the reactions work, so that we can improve this approach on a fundamental level and have a large impact on the field,” Kronawitter said.

He notes that he built his lab to be flexible enough to also study catalysis at high temperatures and in hybrid reactions that use a combination of electricity and heat. “As a scientist I’m interested in exploring the relationships between thermal and electrochemical catalysis.”

Kronawitter particularly enjoys working with his six graduate students. “It’s a joy for me when they start to have breakthroughs and begin teaching me things,” he said. “That’s the way it should work. At the end of their Ph.D. they should know more about their project than I do.” He also enjoys joining department students in an occasional basketball game or run.

Kronawitter was drawn to UC Davis because it is an especially friendly campus and encourages collaborations among faculty in different departments. The latter was important to him because of the interdisciplinary nature of his work. “Sometimes I’m working in fundamental chemistry or physics, sometimes in more traditional engineering, and I think that’s the future of how successful science will be done,” he said.

Kronawitter also believes that UC Davis “is ascendant in chemical engineering and in other related disciplines. We’ve had multiple faculty hires in catalysis alone. So I’m really excited about the future of science and engineering at Davis going forward.”